Although seemingly every hotel in India’s Rajasthan state is either a palace or a self-proclaimed heritage property, to describe the Bharat Mahal Palace as a “royal residence” (as their own brochure does) or a heritage hotel (as the sign in the garden does) is an exaggeration.  This poorly maintained, decidedly grubby hotel is nothing more than a large house overlooking the railway lines, and when we stayed there in January 2011, building work was in full swing. 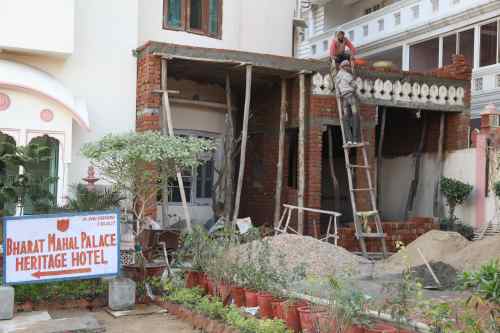 Although the individual members of staff couldn’t have been sweeter and more obliging, goodness knows where management with a capital M was.

On checking in, our room was not ready, which meant that we were able to supervise:

a) re-cleaning of the otherwise dirty bathroom

b) getting the un-ironed, stained sheets taken off one of the beds.

As I said, the staff couldn’t have been sweeter, which is just as well, since in addition to cleaning the room & bathroom, we further had to ask them to:

c) change the coffee table, because the glass top was smashed, with a gaping hole in it

all of which was cheerfully done, to be fair.  The bedside light worked for one day, and then that was it, but we never did manage to get it fixed.

There was, however, nothing the staff could do about the room’s light switches all being in the corridor outside our room.

This meant that the options early in the morning were, either crashing around in the dark or switching every single light in the room on, since we never figured out how to turn just one light on at a time.  All or nothing was the choice.

Ridiculously small geyser, which meant 2 people couldn’t have consecutive bucket baths.  And we had to have bucket baths because the shower head was too clogged to give anything than the thinnest trickle of water.

The whole place was unkempt, and way beyond room-service trays left lying around in the corridors for hours : the litter left on the tiny front lawn after a wedding one night, stayed there for the remaining 2 nights of our stay.

In all fairness, the noisy location cannot be blamed on the owner of the “royal residence”, but it isn’t a nice location for all that.  Railway tracks, a level crossing and a public urinal are pretty soul-destroying.

The food was acceptable : regular buffet breakfast, and the 2 quick lunches we had there were, once again, acceptable.

The only good thing about the Bharat Mahal Palace?  The sweet staff.

Not management, I repeat – the staff.

Parking in the street outside – the driveway is tiny and taken up by an old red vintage car.

We paid our own way & I didn’t tell anyone I blogged – perhaps, just this once, I should have told ’em. 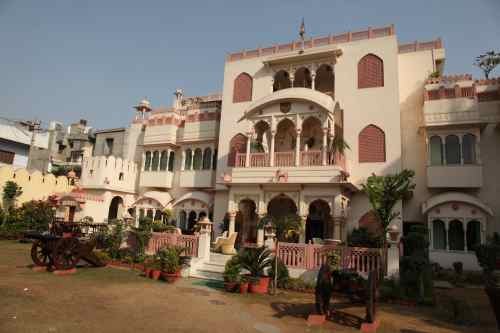