Pindi in New Delhi’s Pandara Road Market used to be an iconic “dhaba”, so I was told.

Simple but with fantastic food.

Buoyed up with a nostalgic memory from his student days, my husband took me there in February 2011.  Gone was the dhaba, which is basically an ultra-simple food joint, to be replaced with a large, but nondescript restaurant.  Patterned walls and alcove-type seating.  We were a party of four, two of whom remembered Pindi fondly.

The wall next to our table was filthy, so perhaps they had kept some of the old-style dhaba, after all.

Famous for its offal – brain curry and brain fry were remembered specialities – my 3 dinner companions chose brain, brain and brain.  As a confirmed non meat-eater, I had tandoori prawns which turned out to be the wisest choice, and the mushroom masala was fine, though eye-wateringly spicy.

The brain curry was apparently not as good as remembered, the brain fry was good, and the “gurda kapura” (kidneys and testicles, another speciality remembered from yore) were a disaster.

No testicles, just kidney and liver.

The first plate was sent back, a replacement dish cheerfully supplied, but this too was deemed not to contain testicles (I obviously didn’t taste any of this, just watched the proceedings) and – yet again cheerfully – removed from the bill.

Bread came long before the food did, so had to be sent back.

My prawn curry came long before the brain dishes, so also had to be sent back to be kept warm.

Morale of the story? 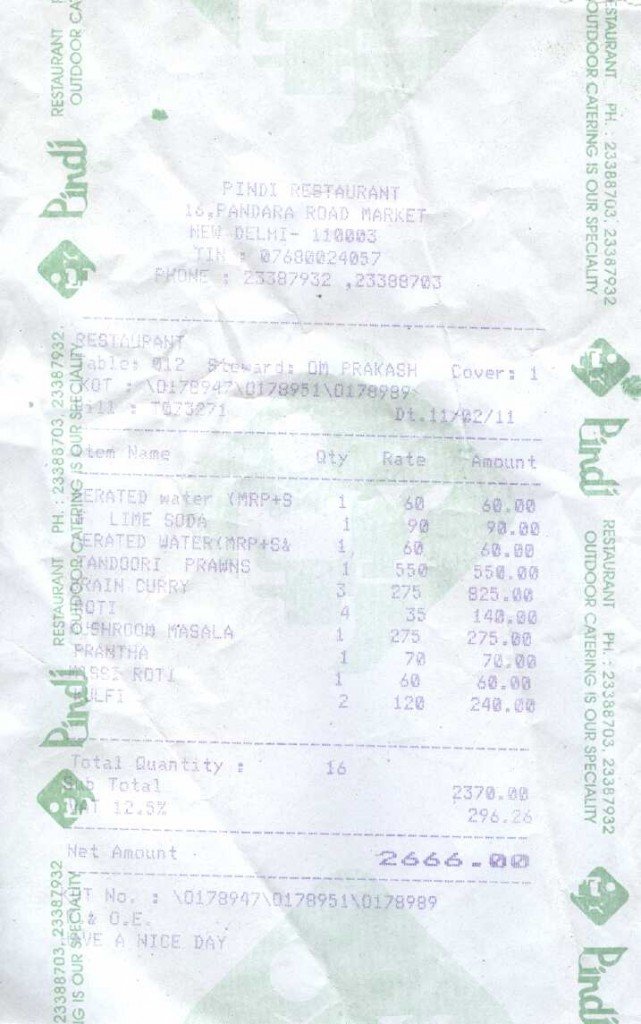 We paid our way.

We didn’t tell them that I blog – but I doubt they’d have cared, to be honest.