Our London based friends were already great fans of GESSLER AT DAQUISE, a Polish restaurant in South Ken, and so at their suggestion,  off we headed, the 4 of us, on a lovely summer evening.

The restaurant has been in London since the 1940s, and the slightly faded, old-fashioned decor pays hommage to that fact – in the nicest possible way.  There is what one imagines to be an authentic whiff of old Warsaw what with the bistro setting, the large wooden table for serving, the mirrors – I loved the ambience. 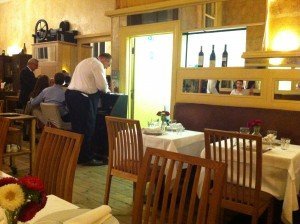 The service was attentive and kind, and actually rather stylish, which is not a word one uses much these days for waiters, is it?  Again, a a slightly old-fashioned feel to it, which is very welcoming.

The young Indian sous-chef who served our food at the table was thrilled to talk about India and speak Hindi with us, and couldn’t have been more charming.

And now to the food, where I have to say up front that I wasn’t as thrilled by the food as my 3 carnivorous companions, simply because I am not a carnivore.  I am essentially a vegetarian although I do eat fish, which left me with Hobson’s choice on the solidly meat-based menu.  There was one cold fish starter, one warm fish starter and one main dish.  Not one single vegetarian offering.

As I said, Hobson’s choice.

I had the cod (below), because there was nothing else, and though the accompaniments were delicious the fish was very cod-y.  Rather heavy and rather dull and I left most of it. (And no-one asked me why, which was a little odd, given the otherwise attentive service) 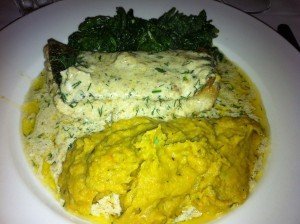 I did try the herring (below) from my friend Eden’s tasting menu (and the staff kindly gave me an extra piece) and that  – on the contrary –  was absolutely delicious.  Thick and tasty and served with all kinds of lovely stuff on the side – fab thick cream, for example. 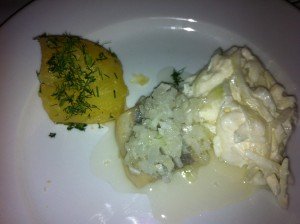 The duck was declared delicious, and it looked pretty good, even to a non meat-eater. 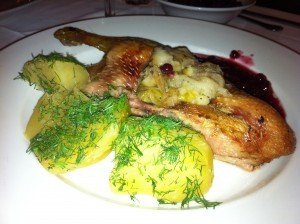 The tasting menu and the beef were both also declared to be a triumph. 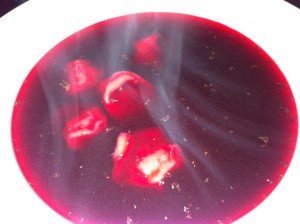 I also had a taste of Eden’s beetroot & dumpling soup, (above) from the tasting menu : very good, and such a new, interesting taste.  And such a fab colour.

Moral of the story ?

Head to GESSLER AT DAQUISE if you love meat, and what I can only call authentic-looking food, served in generous portions. 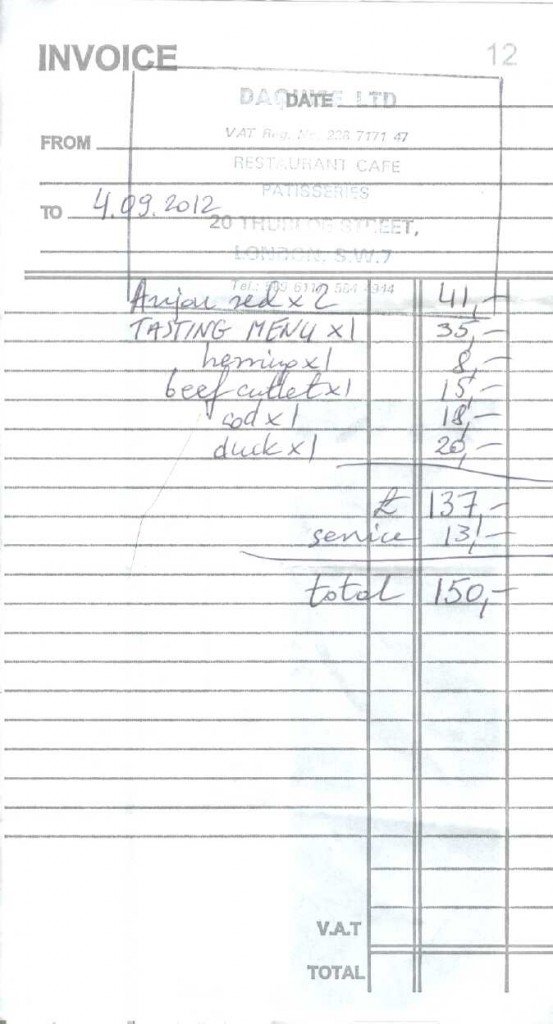 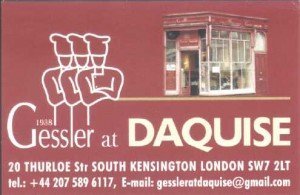