For anyone with an interest in India, then the blockbuster “Mughal India” exhibition at the fabulous British Library in London is not to be missed.

As in absolutely not to be missed.

Let me rephrase that first sentence somewhat.  For anyone with an interest in India and/or history…this exhibition is a must-see.

There are beauties and treasures there that are dazzling, and even for Indian residents such as us, there were fabulous things we had never seen before.

The exhibition is – as one would expect from the British Library –  extremely detailed and you leave with a sense of perspective and – though I rather dislike the word –  an overview of a dynasty that had such a huge impact on the Indian subcontinent.

One word of advice : allow yourself time.

There are so many utterly fabulous, brightly coloured, jewel-like miniatures, all deserving of detailed examination.  It is a crime to skip any of them.  There are coins, armour, artefacts, photographs, books – so much to see and absorb, so , as I sadi, you need time.

Personal favourites were the rather OTT crown of the last Moghul emperor, which Queen Victoria bought, of all things; and a breathtaking 5 metre long painting that consists of a 360 degree view over Old Delhi.

We just walked in and bought tickets on the spot, despite being warned by friends that we should have booked online for a timed entry.  But doing the latter can only be a good idea. 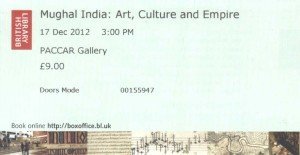