For a lover of south Indian food, the choice of Dakshin for dinner was inspired.  I had been invited by ITC Hotels to visit their Golden Triangle circuit, and our first port of call was their Saket property in south Delhi – the WelcomHotel Sheraton New Delhi.  After an afternoon wandering through Humayun’s Tomb and Qutb, we were ready for dinner.

To so many of us, South Indian food means essentially dosas and idlis, and delicious as these are, Dakshin was an absolute eye opener, offering as it does such a wide variety of food from all the southern Indian states – Tamil Nadu, Karnataka, Kerala and Andhra Pradesh.

We were warmly welcomed by the charming Vel Murugan P, who is the Assistant Master Chef, and at our request, he designed a tasting menu for us, with small portions of a whole wonderful range of food.

What could be better, and right from the start, it was a winner.

As in even the papad was different.

The inadequate photo (below) does not do justice to the crispy papads and (a first for me) “murgh appalam” which are absolutely delicious fried, stuffed chillies.

Too fabulous.  I could’ve made a meal out of these! 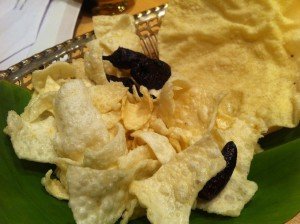 Our thali was first prepared with a selection of delicious chutneys – coconut, coriander, tamarind and tomato – into which we liberally dipped the crispy papads, all the while telling ourselves “This is just starters, save space for what is yet to come.” 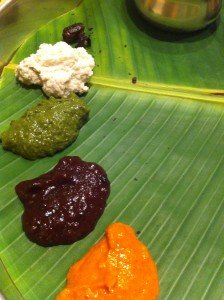 First on the menu was Kuzhi Paniyaram, delicious rice and lentil dumplings (below).  I am not usually a fan of fried food (she says, having wolfed the papads down) but these dumplings were so good : 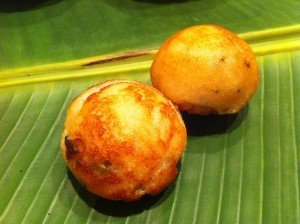 Dakshin Yera followed.  Deep fried prawns which were also delicious, so there goes my fried theory.

But the piece de résistance as far as I was concerned came next, Meen Polichadu, which is sole wrapped in banana leaf, steamed, and flavoured with tamarind, and which was melt-in-the-mouth delicious (below).  So delicious, in fact, that my dining and travelling companion, the young but very experienced food blogger Charis Bhagianathan, gently reminded me that we did have other things coming, and perhaps I should leave some space.

I polished the whole thing off. 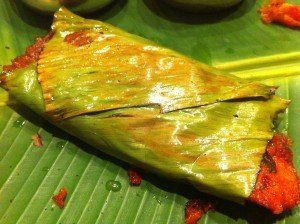 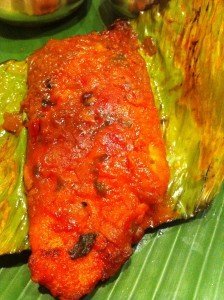 More prawns followed.  I should perhaps here mention that I don’t eat meat and that the whole menu at Dakshin was designed to suit my whims, and Charis sportingly went along.  So more prawns followed, this time in a drumstick paste –  the dish was called Raal Poruma Kootu, and was followed by Vartiyat, a deliciously creamy and tasty mixed vegetable curry (below) which, yet again, I polished off. 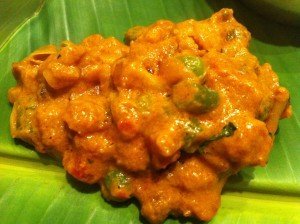 I cannot believe that we actually continued eating, but we did, and oh my goodness was the Meen Moilee so, so good : 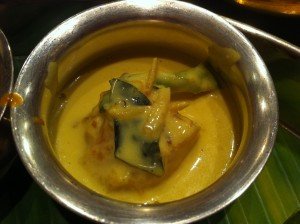 Since I love coconut and mustard unconditionally, this dish was bound to be a hit – tender fish cooked in coconut milk with mustard seed.  Perfection.  Accompanied by delicious appam (below) and especially the tomato pappu dal, the whole taste and texture combo was a success. 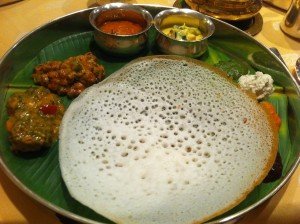 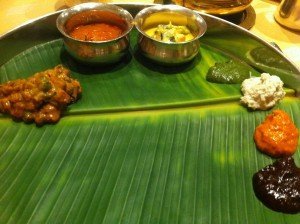 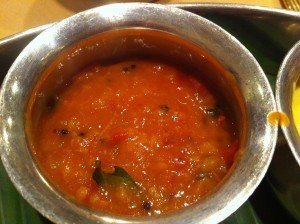 A flaky malabar paratha (below) also accompanied the meen moilee but (a) I was too full to do it justice and (b) I am not the biggest fan of parathas, so this was a case of a quick taste, rather than scoffing the lot, as I had done hitherto : 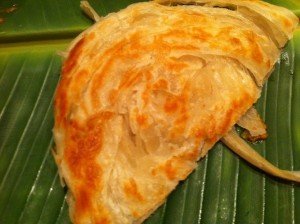 I drew the line at pudding, since I was too full of delicious prawns and fish, but Charis tasted the jaggery payasam (below) and declared it a winner : 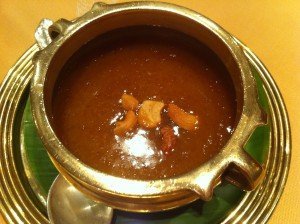 Even though I am addicted to coffee, I declined pre-bed coffee on the grounds that we had to sleep before the early start the next morning, but the demonstration was good fun :

And the coffee smelled so good : 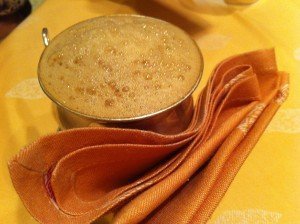 Lovely setting –  small-ish restaurant but with an intimate, authentic feel : 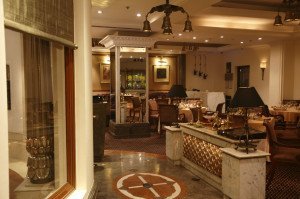 Service was charming, the staff were very informative about the food they were serving us, and Chef Vel was charming.

And the range of food and he new tastes and flavours were wonderful.