Having just returned from a very successful climbing trip to Ladakh, I want to share with you here my impressions of the company with which I travelled – the Delhi based White Magic Adventure Travel.

I have trekked and hiked in the subcontinent before, and despite the continual joy and beauty of the scenery, I have usually had reservations about the outfitters, ranging from minor niggles to downright dangerous and unprofessional behaviour.

There is one company here in Delhi that I would not touch with a barge pole.

No such reservations this time round.

The level of competence and professionalism I experienced at every stage of my dealings with White Magic inspired confidence, and will also inspire further trips with them.

I went to meet the owners of White Magic before I signed up for the climbing expedition to 6155m Mentok Kangri in the Indian Himalayas. Their office is in Delhi’s Gulmohar Enclave, and there was an air of calm competence that I found reassuring. Regular emails followed with kit lists, training advice, and individual queries were efficiently and speedily answered. 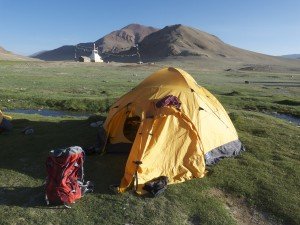 We all met up in Leh towards the end of July, and since Avilash Bisht (one of the owners of the company) was completing a successful climb on Mount Kun, the pre-departure logistics and the first half of the trip were handled by the charming, serious and uber-competent Tsewang Namgyal. When we met in Leh, Namgyal asked to see all of my equipment, examining everything in detail, including the quality of my glasses for summit day. He checked all my equipment, from my gaiters to boots, even asking how many pairs of socks I had and then checking them for suitablility – great thoroughness which I have never yet had with any other Indian outfitter.

On the trek we were 5 putative climbers + 1 super experienced climber + 2 trekkers who would not be attempting the climb, and we had a staff of 5 (and loads of horses and a darling noisy little donkey). 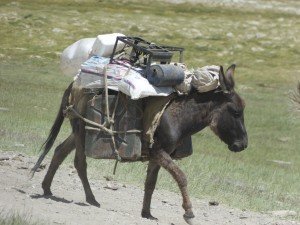 At the point when the trekkers would leave us, which was the only place with road access during the trek, Avilash and another experienced guide joined us, so for the summit attempt we had a crew of 7. 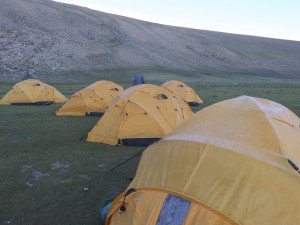 Since our numbers also depleted with 3 of our group deciding not to try for the summit after all, the ratio became very favourable towards we remaining 3 climbers.

The service and kindness of the staff cannot be too highly praised. Already very caring and always willing to help, they all became super heroes in my eyes.

I slipped on the way down from the summit, damaging my right arm. I thought I had just sprained a muscle. Turned out I had an avulsion fracture.

From that moment onward, not only did Namgyal and Mohan virtually spirit me down to high camp then intermediate camp, the rest of the crew were amazing.

My arm hurt too much even to tie my shoe laces, so with great kindness every day, some one would lace my boots for me, would pack my things, deflate my mattress, roll up my sleeping bag.  And all with a cheerful smile and a brushing off of my embarrassed thanks.

As soon as I fell, Namgyal tested my arm to see if it was broken (it was, but none of us knew for 4 days, until I went for an X-ray in Delhi) as did Mohan later, and then Avilash, who put me on painkillers and into a sling.

So, on that score, full marks to White Magic.

I had no qualms re their first aid knowledge.

Even I didn’t know I had broken my arm, since it just looked bruised and wasn’t swollen. (Still isn’t)

Tents and equipment were all in good condition, and for the first time ever in over a decade of serious trekking, I could have dispensed with my own mattress.

Avilash told me they supply good thick mattresses, and they do.

My (superfluous) mattress being packed for the horses. 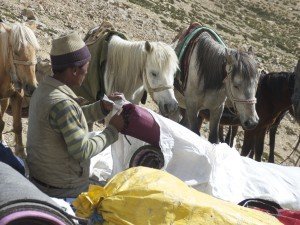 When Mohan thought he spotted a leak in my mattress, him & Namgyal calmly set about repairing it, without even telling me till it was finished. 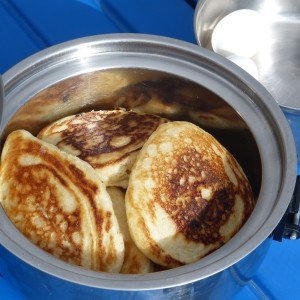 Food was essentially veg (as am I) so no complaints there.

Very generous servings, lots of little extras like a constant supply of biscuits with tea, popcorn in the evening – so there was very little need for the energy bars I took along.

The cook, Ramesh, soldiered away day and night producing endless cups of soup and nutritious Indian meals, with a few stellar performances such as momos one night.

Even at 5000+metres, there was an attempt at style on this trek. 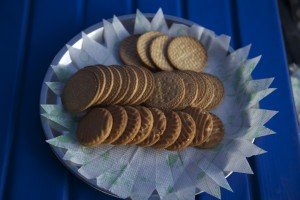 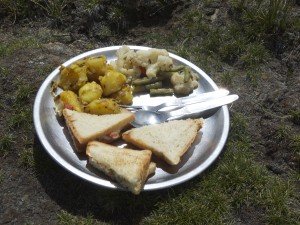 Most days, a hot cooked lunch, complete with crockery and cutlery (above) was carried up the slopes for us. Seriously good service.

On summit day, when I collapsed back into my tent at high camp, tired and with an aching right arm, I did not feel hungry (a rare thing for me) and this so worried the delightful first-timer in the crew, 17 year old Zakir Hussain, that he tried to spoon feed me, telling me in a surprisingly maternal way to open my mouth since I had to eat and that it was good for me.

There was always a wide array of jams and honeys and spices and pickles and (always) hand sanitizer on the dining table. Black tea was always on offer, and tea or coffee was served in your tent at wake up time – what a treat.

We started out with 2 loo tents, but ended up with just one, which wasn’t such a big deal overall despite my misgivings. The logistics of loo tents at altitude, especially when it is difficult to build suitable pits are difficult, and except for one camp site where it was very marshy, the crew managed to make the best out of a difficult job.

Summiting is always a special moment, and when I finally stumbled up onto the rocky summit of Mentok Kangri, it was to the cheers and applause of Namgyal, Mohan, Lapsong, Zakir Hussein (who may be the youngest person to have summited ??) and dear Gangu.

Avilash was behind me with one of our team.

Kuntal Joisher, a terrifyingly fit young man who was training for Everest, had even managed to change into an Everest themed T shirt, bless him, and so my summit time was a happy mix of tears, and prayers, and hanging up prayer flags, and photos, and the ceremonial offering of one of my energy bars to the benevolent mountain gods.

The Leh office, headed by Tashi Angchuk, was just as efficient, collecting me from my non-team hotel in Leh, then going back to collect my GPS that I had forgotten.  The rental of snow boots and crampons, and airport drop off were all handled seamlessly by Tashi.

I could not have wished for a nicer group of people with whom to share such an emotional (& literal) high. 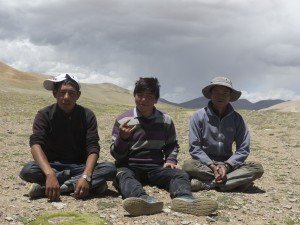 Lapsong, Zakir & Gangu just hanging out.  As one does at altitude. 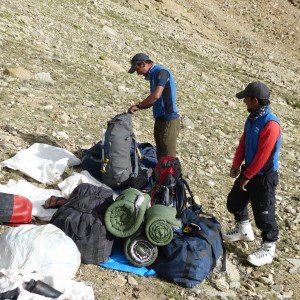 Namygal and Mohan (above) getting ready to set up the fixed lines.

Avilash (below) in a rare quiet moment, at Tso Moriri.  Usually he was in the thick of things : 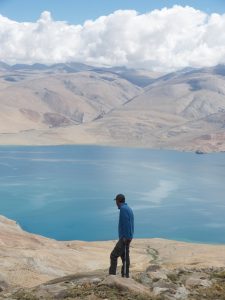 Will I travel with them again?
Yes, just as soon as my arm heals.

The company has a great website, and though it is Delhi based, our initial team of 8 clients comprised 3 of us from Delhi, 4 from Bombay and 1 from the UK.

I paid my own way (obviously) and didn’t tell the White Magic people that I blogged until the trip was over.