Another day, another serious mall-trawling session in Dubai, and we decided to try another Lebanese restaurant in the Dubai Mall.

After leaving Wafi the previous day, we had then walked past Zaitoni, which was jam-packed.  And with locals, which is always a good sign.

Yet again, we opted for a selection of mezze platters, but after yesterday’s over-ordering, we only chose 3 dishes – but since the servings were even larger here than at Wafi, we walked out with a copious doggy bag.

Unlike Wafi, there was a dish of olives and pickles, and a basket of fabulous Lebanese bread, whilst we pondered the menu choices.  We decided to do a repeat performance of a choice of starters. 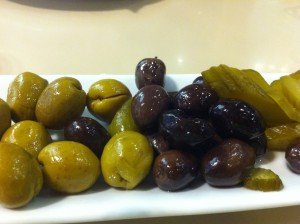 The food was also quite different, in that both the fateh humus and the foul bel labneh were served warm.  I tried asking the waiters –  who all appeared to be Arabic –  whether this was the Lebanese or Armenian influence but there was such a communication gap, that I gave up.

One waiter managed to explain that the humus was cold but the oil poured on it was warm, which made sense, though the whole dish was warm as a result.

Nice, but a little odd initially. 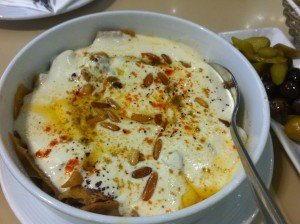 This is the Fateh hummus, above.  Chick peas below, then hummus on top, then pine nuts, then warm oil poured over the whole dish.

The foul bel labneh was nice, once one got over the warmth, if you see what I mean. 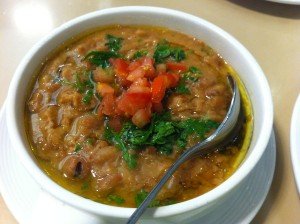 The falafels were delicious, but such a huge portion. 4 large servings : 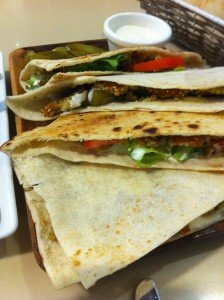 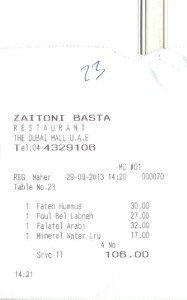