This uber-feel-good film escaped my notice when it opened in 2010 (sadly, I don’t think it never made it to the Delhi cinemas) and so thank you to the good friend who gave me the DVD.

A lovely film, with a stellar cast, and oh my word for someone who remembers the 1960s rather too well for comfort, what a gorgeous visual treat this film is.

Barbara Castle (has Miranda Richardson ever looked so fabulously better and feisty?) 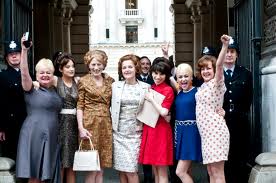 All those classic 1960s markers are there.  Harold even makes an appearance, but minus his trademark pipe.

The story is based on the true events of 1968, where female workers at the Ford Dagenham car plant walked out in protest against sexual discrimination, and unequal pay.

And the real live heroines of the story : 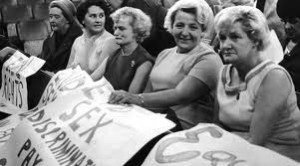 It is a beautifully filmed, fabulously detailed, period film (though that word “period” sounds a bit ancient, especially when I remember the 60s…) starring some of Britain’s finest – Sally Hawkins, Miranda Richardson, the beautiful Rosamund Pike, Bob Hoskins, the fabulous Geraldine James, and from over the Pond, Richard Schiff playing to perfection a pushy American executive in slow and rather dreary Dagenham.

What resonated particularly with me, beyond the spectacular recreation of the 1960s –  was it really such a relatively benign era? – is the fact that living in India, a concept like sexual discrimination is still so far from being banished. 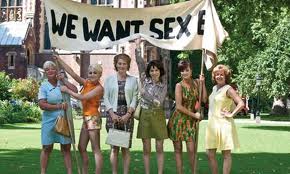