At first I thought it was an age thing.

As in “I am SO old that clearly I don’t get the humour of youngsters today.”

But then I looked at my husband and another friend our age, and they looked as mystified as I did.

Then I thought, “Oh, it’s because I’m not Indian that I’m not getting the jokes.”

But then I looked at my (Indian) husband and another (Indian) friend our age, and they looked as mystified as I did.

And then I decided that the truth of the matter was the “The Weirdass Pajama Festival” at Delhi’s Siri Fort last night was, quite simply, not funny.

I tried my best, I really did, to “lighten up”, as my 24 year old daughter kept admonishing me to do, but whatever passed for humour onstage last night at the Siri Fort just didn’t do it for me.

The concept is as follows :

7 stand up comics take turns at insulting each other and the guest for the show, one Suhel Seth, who then gets to insult them back.

Mr. Seth sits in an armchair on a dais, while the 7 comedians lounge around on charpois, laughing uproariously at each other’s jokes. 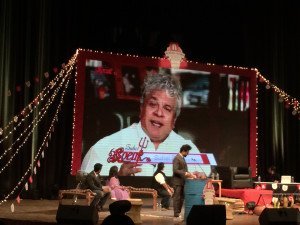 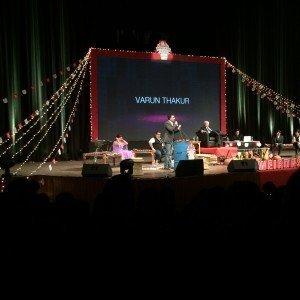 Mr. Seth is one of those all-embracing figures thrown up occasionally by society –  an ad man, a columnist, a commentator, a staple of every gossip column –  and, it must be said, a man who sat there and laughed uproariously as each of the 7 young comedians was incredibly rude about him, while everyone laughed uproariously around him.  Both onstage and off stage.

There was a young woman sitting behind me who said at one point, “Oh God, my jaw is aching soooo much with all this laughing”.

If you took out the F word which was in continuous use all night, and if you took out every reference to vagina, penis, boobs, balls, foetus, abortion, sperm…you see where this is going, don’t you?

If you were to extract the swearing and the constant reference to body parts, and the pelvic thrusts, you would be left with…precious little.  One or two jokes, a coupe of witty one-liners, but not much else.

To be fair, the last performer, Suresh Menon, was good at accents which was funny, as he did a parody of a popular TV talk show, imitating a range of personalities.  Clever.

Otherwise, honestly, a total waste of time and money.  But everyone else was laughing uproariously, so don’t take my word for it.

And it is a concept that takes place across the country, to packed houses, apparently, so yes, actually, don’t take my word for it.

Parting shot, which is absolutely nothing to do with the Weirdass Pajama youngsters, I hasten to add.

Despite hosting President Obama last week and getting an expensive makeover, so we are told, the Siri Fort Auditorium is as awful as ever.  One whole section of the balcony ended up shouting in anger & disrupting the show, because they couldn’t hear a thing –  the sound system wasn’t working.

And as for the utter chaos of the entry: one small gate with hundreds of people pushing through.  An accident /stampede just waiting to happen.  WHAT is it with India and closed gates and forcing people to push & shove their way into venues ?

And the car park & the traffic were as horrid as I had remembered.

But as I said, that’s Siri Fort, and nothing to do with the show.