I am not a running/fitness/shoe expert.

I am simply a freshly minted runner, who has gone from 0 – training for her first marathon in 18 months.  In other words, what I have to say about my new running shoes is 100% personal, and not “professional”.

After (literally) running through my old Revenergy Boost which saw me through my first-ever half marathon, as well as my second, third, fourth and fifth HMs, the time had come to replace them.  It almost felt disloyal to replace them, since they had shepherded me through so many late-in-life thrilling milestones, but after 7 months they were pretty worn out.

So, yes, I loved my old shoes – everything except the dull grey colour, if I am being honest – and decided to stick with what I knew, and bought another pair. 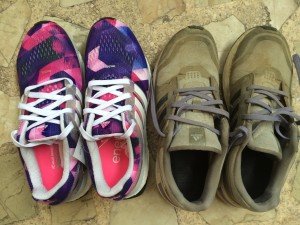 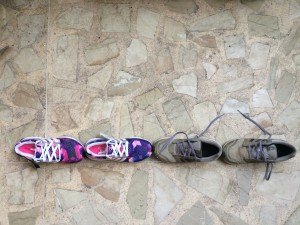 Oh joy! The new version comes in a fab colour. Despite my age, there is nothing wrong with loving jazzy pink and purple shoes, now, is there? 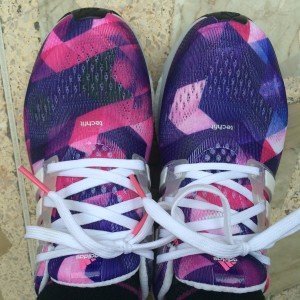 Love the noticeably bouncy tread.  You really do feel as though you are bouncing along with extra energy, when you run in these shoes-see how worn down my faithful old ones were in comparison. 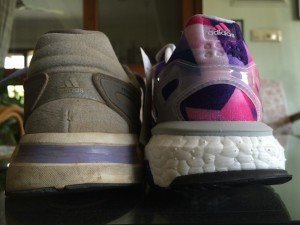 The only thing I am less enthusiastic about in this new version of the Energy Boost is the tongue, which doesn’t open as wide as the older version did.  So I have taken to using a shoe tree to help me put them on, rather than forcing my foot in and damaging the back. 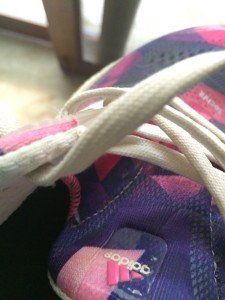 Other than that, love ’em.

I have a tendency to pronate, and was told that these shoes will definitely help. 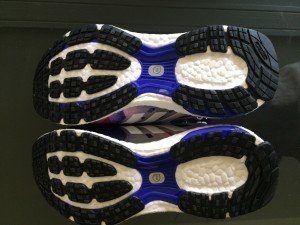 Buying these beauties coincided with my signing up for a #100daysofrunning challenge, so I now have a clever phone app predicting the life of my new shoes.

Alas! After exactly one month, to the day, I have (it would appear) already used up over a third of their predicted lifespan. 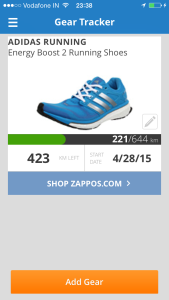 I bought these shoes, paid for them myself, and did not tell the shop that I review and blog.

Would I buy them again?

Yes, going to do exactly that.