I always knew that my friend Karam Puri was a talented and, most importantly, a very technically gifted photographer.  That was clear from the way he kindly and patiently taught me how to take photos in Ladakh’s challenging evening light, but it was not until seeing his beautiful photographs in Gallery Espace in New Delhi, that the full force of his talent became clear.

The just opened exhibition entitled EP : Extended Play is a tender and affectionate look at the fading lifestyle of the former rulers of India’s princely states. 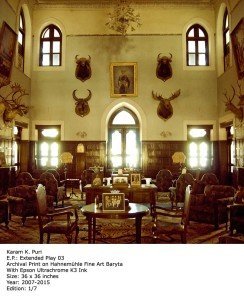 In a series of evocative, superbly composed images, we get a glimpse into what was once a life of luxury and privilege, but that is now, sadly, a little frayed around the edges.  Never falling into clichés, Karam shows us the dustiness and shabbiness that now overlay the grandeur and style of the past. 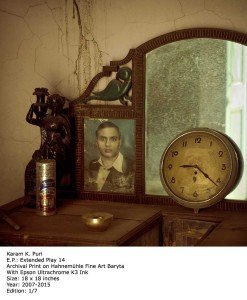 Here, listen to the artist in his own words:

“The air is thick with melancholy. These walls speak a language of loss, lost time and stillness.

The plaster peels off lime washed walls while crackling melodies play to an empty room. The needle glides gently along the surface of vinyl at the deliberate pace of 33 revolutions per minute. In this world, in these rooms that long to be filled as they once were, time is suspended, moving only in slow circles. Repetition gives the illusion of forward momentum where only stillness is left.

Tea is served the way it has been for centuries. Faces of the past adorn the walls.

These spaces, homes of the Nawabs and Rajas, now find themselves victims of their own lust for an opulence that once was. They are now time capsules, suspended in a world that changes rapidly around them.

Much like a movie set waits for actors to give life and breath to the illusion, these house’s wait, to be satisfied once again, by the stories that they long to be home to. The rooms yearn for people to come back; for the music to play; for the scandals to unfold; for courtesans to dance and for the finest wines to be uncorked again.

E.P.: Extended Play aims to capture, explore and expose the sense of lost grandeur not through the stories of the people but essentially through the stories of the rooms usually unfolding a narrative. Shot over a period of six years across the Indian subcontinent, these majestic homes of Rajas and Nawabs have lost many of their privileges and their power. They are still given the utmost respect by their subjects, but can no longer afford the lives they once did. This suite of 24 images shot both on film and digitally tell stories of a lifestyle lost to time, suspended in the belief that one day the music will once again play at 33 revolutions per minute.”

As Karam says, these rooms are indeed like a movie set, for there are no people in them.  Just objects, elegantly displayed, the way they have been for decades. 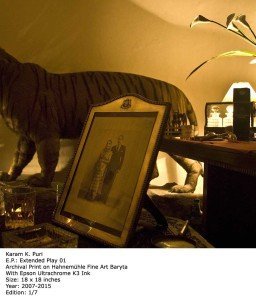 Do visit this exhibition, which is on until 8 August.

Here is the link to the website of Gallery Espace with their address – it’s in New Friend’s Colony. 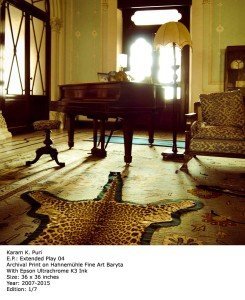