Yesterday, with great reluctance, I left snowy, wintery, beautiful Leh, and headed back to Delhi, after another stunning trip with White Magic Adventure Travel.

As I unpack and download my photos and generally ease back into city life, I thought I’d put pen to paper (as it were) and give you an update on the travel company that organised this latest adventure.

I have travelled with White Magic Adventure Travel twice before and have written about them in an earlier blog post, but since every trip is different, I felt an update in order.

No surprise, White Magic did it again.

In the face of extreme weather, beyond unpredictable conditions, sickness (that would be me…) we had a fabulous trek on the frozen River Zanskar high up in the Himalayas. 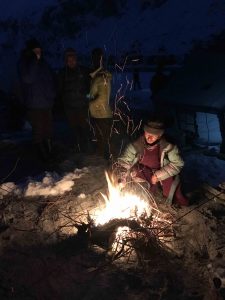 The River Zanskar freezes over in the winter and what has always been the traditional access route between Leh and Zanskar for the locals, has become an increasingly popular trekking destination.

The very nature of this trek means it is extreme in every sense – you are camping on a frozen river bed, and the logistics are nothing short of astounding. Tents, food, supplies – everything has to be ferried by hand, with a team of 20 fabulous porters dragging the food and luggage and baggage on wooden sleds, and then hoisting both sledge and baggage onto their backs whenever the ice was broken and we had to clamber up hills. (More anon).

The trip started in Leh, and it was great to catch up with old friends from previous treks, like dear Tashi Angchuk, Nitesh Sati and Mohan Singh, who has always been a tower of strength.

On day 2 in Leh, I felt unwell – drowsy, no appetite, vomiting – and so after a morning of worried nagging by Sanjeev Ganju and Tashi, I was marched off to Leh hospital and put on oxygen.  I wound up spending the night in hospital on oxygen. 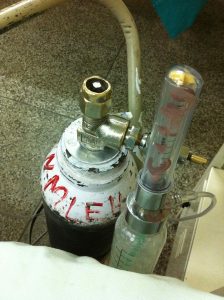 Since my oxygen saturation level had risen overnight, I was cleared for travel the next morning, though Sanjeev made it quite clear to me that at the slightest hint of further sickness on my part I would have to turn back.  And no discussion.

This is one of the reasons I travel with White Magic –  they are safety-conscious in the extreme, and expect you to follow their advice.

Another member of our group came down with a bad stomach so he too was whisked off to hospital, injected and also cleared for travel.

Full marks to White Magic for prompt reactions – and for visiting me in hospital late at night and first thing in the morning.

So, off we all set to drive to our departure point.  Nitesh had done a recce run the previous day so it came as a total surprise to him when we rounded a bend in the road and – whoa! – landslide. The road totally blocked.  No way vehicles could get through.  And so we scrambled over the landslide and walked, while the porters had to offload and reorganise and walk for miles in the sleety cold snowy weather.  Indeed, some of the porters wouldn’t even make to our first campsite until the next day, poor fellows.

I shot this video as we left the valley after our trek – and to be honest, the landslide looked even worse than I’d remembered…Goodness knows when it will be cleared.

The Chadar – the ice cover on the river – was so broken in places that after 5 days, the decision was made that we should turn back, having already accepted that our 3 day planned homestay in Zangla was out of the question, since the region was under 5 feet of snow & inaccessible.

Throughout all his process of decision-making and re-working arrangements, plus 2 people turning back earlier, Sanjeev, Tashi Zangla and Nitesh handled things with smooth but firm efficiency.  Cups of tea, warm fires, hot meals – everything went like clockwork, despite all the behind the scenes headaches. 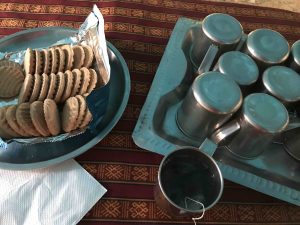 The weather was so extreme that the DC – the local authority – actually closed down the Chadar trek for a few days, banning anyone from setting out, and in addition Leh airport was closed by snow for 2 days.

There was no mobile connectivity, satellite phones are not allowed in India, so the fact that the trek leaders rearranged, planned, re-jigged our trip is nothing short of a miracle.

We were fed copious amounts of food, served gallons of tea and hot mango juice (my latest fav drink, by the way) and slept every night, come snow or high winds, in super-warm double sleeping bags and I, for one, was honestly never cold.

OK, let me rephrase that – it was cold, but I was honestly never uncomfortably cold.

OK, admittedly, one night I did sleep in 2 layers of fleece, I never took my thermal beanie off once – but other than that… 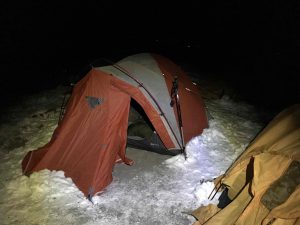 After we turned back from the Chadar, the White Magic team quickly re-organised the rest of our stay.  A welcome night back in the toasty-warm hotel in Leh, and then off we went for a 3 night homestay in Stok village –  all quickly arranged on the go – and never forget the lack of connectivity. 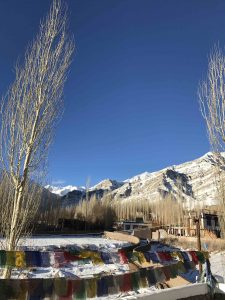 From then on, people started peeling off, heading back to Leh earlier, and with the threat of more snow, some of the group even brought their flights forward.

I didn’t, deciding to gamble on the weather gods and indeed the predicted snow never came, and so I squeezed every last moment out of this amazing trip.

Tashi and Mohan even took the final remaining 4 of us rock climbing, which was super-fun & has now inspired me to tackle new ventures…

our kitchen crew baked a birthday cake for Anu, we watched the cricket with our homestay family, our kitchen crew and – I think – a few neighbours, all of us happily ensconced around the heater or “bukhari” – oh, the whole adventure was so much fun, and it was a credit to Sanjeev and his team who took a lot of strain. 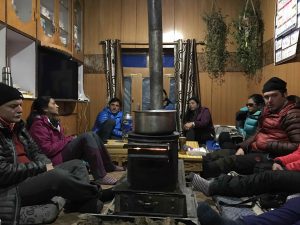 Trekking in -15C/-18C is already tricky enough, but when you add landslides, dangerous ice conditions, a lack of connectivity, then even more praise is due to the competent, devoted folk at White Magic Adventure Travel.

I fully and whole-heartedly recommend this company – and the proof of the pudding…I have already signed up for my next trip with them in April.