Other than the irritating “Cigarettes are injurious to health” warning which stayed on the screen almost all through the movie, I had nothing to fault in this fabulous film.

So this review is actually going to be little more than a song of praise for outstanding acting, wonderful period detail and the creation of amazing tension, even though we all know the outcome. 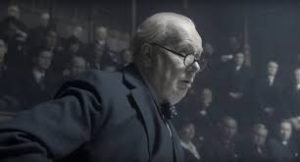 Gary Oldman is extraordinary as Winston Churchill, brilliant orator, quick-thinking, irascible, insensitive to those around him who love and like him, and a street-fighter of note.

His outsmarting of his War Cabinet through his emotional speech to his Outer Cabinet, in which he liberally quotes people he just met on the Tube is a classic moment, demonstrating his amazing oratorical skills.  The Tube moment is, apparently, fiction.  But it makes for good cinema. 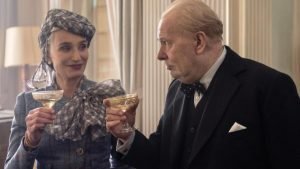 Kristin Scott Thomas as Clemmie is sublime, looks utterly fabulous in those chic 1940s clothes and brings out a more vulnerable, likeable side to Winston Churchill.  Clementine was clearly the ballast for her husband and although Ms Scott Thomas’s screen time might be limited, she fleshes out Clemmie’s character so perfectly that we feel we do indeed know her.  When she toasts her husband on becoming Prime Minister, it is a masterclass in how to deliver a rebuke with love and respect. 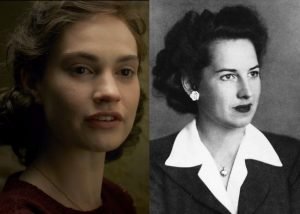 Lily James as Churchill’s secretary Elizabeth Layton is gorgeous., with that winning smile of hers.

Oh dear, that’s hardly a deep-insight-y kind of thing to say, but Ms James really is so lovely, and makes Ms Layton into a delightful, vital part of the PM’s life. 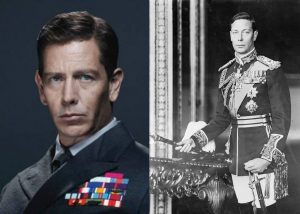 The atmosphere of England in the late 30s and early 40s, when it was a world of privileged white middle-aged men, with hardly any women and ne’er a non-Caucasian face visible is superbly re-created, with the scenes in the House of Commons bringing home, if ever one needed a reminder, of how Britain has evolved over the decades.

Having said that, the only false note was, for me, the presence of a black Londoner on the Tube.  I’m no historian, but I just cannot see Winston Churchill sitting and chatting like that.  Maybe I’m wrong.  That scene was just a tad too PC for me.

But that minor criticism aside, this is a stunning film, and I cannot praise it too highly.

And, as a matter of interest, is it an Indian thing (I live in New Delhi) to have that tobacco warning on the screen each time a character lights up? Which is almost all the time.  Or do other countries do this as well?