If you haven’t ready been to see “Aladdin”, do so now!

Judging by the tragically more-than-half-empty auditorium last night, people are not exactly flocking to see this great musical production.

In the short speech of thanks after the show, the director Shruti Sharma specifically thanked us all for coming “on a Tuesday”.  I do hope she hasn’t had to make a similar comment about every other day of the week.

I really & truly hope for the remaining shows that the Jawaharlal Nehru Indoor Stadium is packed, and (sorry for saying this) packed with a more appreciative audience than ours last night.

When we arrived, the delightful crew of ushers (more anon) told everyone to move further down towards the stage, regardless of where our purchased tickets were.  There were stickers on row after row after row of seats, indicating they were empty.

How disheartening for the cast, especially since they went down into the audience at times to sing, and so would have been confronted by rows of empty seats.

Perhaps we just got a particularly dull & unappreciative audience, but my goodness me, were they stinting in their applause.  A cast of super talented youngsters sang and danced their hearts out, and there was scant applause, and when we stood up to give them their much deserved standing ovation at the end, we were asked to sit down by the people behind us.

Anyway, this review isn’t actually about the people sitting around us, arriving late, checking their mobiles during the show, hardly applauding – no, begone with such dull, unappreciative souls!  This review is about the amazing singing and dancing and the enthusiasm of this talented cast. 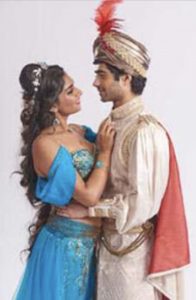 The show was great fun, and there were moments of sheer magic – the magic carpet for one.

We were a group of 6, namely 2 sets of parents with their 2 daughters, both in their late 20s (bet you thought I was going to say they were little girls, right?! :P) and let me tell you, these 2 young ladies, die-hard fans of the 1992 film, a staple of their childhood, were very excited and also very intrigued at how the magic carpet scene would play out.

Just let me say that it was brilliantly done (I won’t spoil your surprise, don’t worry).  A super moment that did not disappoint. 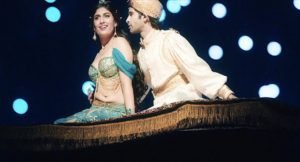 It is invidious to single out individual actors, in what was a great all-round ensemble effort, but the show stopper is the Genie, played by Mantra, and he is an absolute knockout. 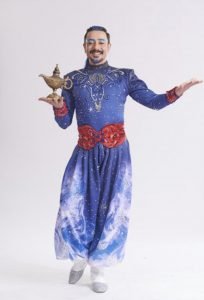 Weaving Hindi into the script, with local jokes and references, he is absolutely fantastic.  His arrival on stage created an instant buzz, and his portrayal of the Genie as slightly camp was hilarious.

An insight into just how much wonderful singing and dancing talent there is here in India – for this is an entirely Indian cast.

So, if you haven’t already seen Aladdin, what are you waiting for?

Hurry up & go, and PLEASE applaud and show these hard working artists that you appreciate their talent.

Oh yes, the ushers.  Remember I mentioned them at the outset?

Every one of these smiling youngsters greeted us with a courteous “adab”, welcoming us to the venue as though into their home.  Same on the way out, hoping we had enjoyed the show, and thanking us for coming.  Delightful touch 🙂

We paid for our tickets, and no-one connected to the show knows that I blog and write reviews.